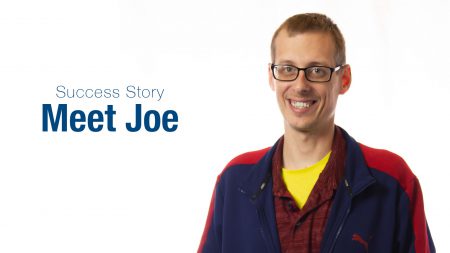 Joe was a professional chef working at Wright State Nutter Center. He was working all kinds of events like concerts, and fundraisers, but the job was taxing. “I would work 14 hours a day depending on how big the event.  I was responsible for cooking and cleaning.  My shift would begin at 8 a.m. and on most days would not end until after 1 a.m.  I had to be there, I could take breaks, but you must be there for the client and then clean up for the next day’s event.”

During the pandemic, Joe instantly got laid off.  In March, Wright State Nutter Center closed the entire event space because big groups were not allowed. “So as soon as the Corona hit, we were kicked out.” So, after 5 years working at Wright State Nutter Center, he found himself unemployed.  While Joe was receiving unemployment, he was going to school for Computer Science.  “While I was taking classes at the nearby University, my girlfriend, who works at a Goodwill Store, saw information about an IT Google Certification Program offered at the Goodwill Easterseals Miami Valley (GESMV) main campus.   I instantly signed up and jumped on it, as my unemployment was about to run out. “

“I was a chef for 15 years. Anyone can do this certification program.  I haven’t been in High School for 17 years and was able to pick it up quickly… you just need to keep with it.  It was a nice add on to my journey.”

Joe believes that if you put your mind to it, you can accomplish anything.  “The first part of the Google IT Certification Program begins easy and then the farther you go, the more difficult it gets.  You learn the basics of computers from Mac and Windows, you learn networking and how it all ties together.  It was all about breaking it down to the basics of everything.  You also learn a little bit about how code works and then the last part was about cyber and network security.”   Joe’s journey into the IT industry started about three years ago. He wanted to be in IT and go back to school but finding the Google IT Certification at GESMV enabled him to finish a computer program much sooner than going to a two or four-year college.  The class is a four-month program, but Joe finished in two and a half months. “I was doing everything every day.  I was unemployed and this gave me something to work towards and a new future in my reach.”

After completing the IT Google Certification Program, Joe interned at GESMV IT Department.  During his internship, he was offered a position!  “I would still be going to school grinding out cybersecurity.  I wouldn’t be here right now; I could get back to work quicker and have a purpose! “

Joe is still going to school and working at GESMV full time. “I get here at 8 am in the morning and I pretty much solve people’s IT issues. I love this job because it is fun.  I come from Culinary and it is a lot different. I was working 2nd shift and now I get to work 1st shift, it’s beautiful.  I just like being here; the atmosphere is so great.  I get to see people and solve their problems.  It makes me feel so good helping people.  I run wires, set up PCs, help those with IT questions, and much more.  What’s great about this job is I can sit down. In the culinary business, you are on your feet and standing for 10-15 hours a day.  Not only do I have a great job, but I have so many great benefits!”