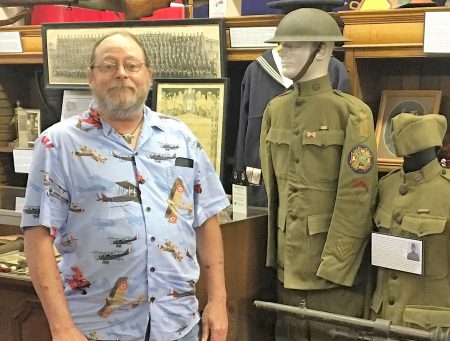 “Goodwill gave me a purpose again. GESMV helped with my PTSD and depression. The people of Goodwill are always there for you; being able to talk to them really helped.”
– Michael “Mac” McBride

Michael “Mac” McBride has not had your typical life. Mac is a United States Air Force Veteran. He enlisted in the Air Force as a Crew Chief and became a flight control/landing gear specialist. His assignments have taken him all over from Mississippi to Alaska and everywhere in between. Mac served on two major deployments: at Al Dhafra Air Base where he was involved in Operations DESERT SHIELD and DESERT STORM, and Aviano Air Base in Italy where he was in support of Operation DENY FLIGHT. He even served in a Hurricane Weather Reconnaissance Squadron where he flew in two hurricanes. Mac was honorably discharged in December 1993.

Coming home from War was not an easy thing for Mac. “I had a hard time finding a job and I felt isolated. People treated me with a skeptical eye.” He eventually got hired by the International Truck and Engine plant. Mac worked for International for 15 years. However, he eventually was medically laid off.

He then turned for help at the Department of Veteran Affairs (VA). Through a VA counselor, Mac started taking a business skills class at Goodwill Easter Seals Miami Valley (GESMV). While taking the course, Mac realized his passion for teaching. During the course, he helped the Goodwill instructor with the challenging students.

However, GESMV’s help didn’t stop there. After Mac completed the business course, GESMV helped him become a Veteran Affairs Rep at Central State. Along with becoming a VA rep, Goodwill got Mac involved with the Senior Community Service Employment Program (SCSEP). SCSEP provides job training and employment opportunities for seniors age 55 and older who may be facing barriers in getting back into today’s workforce. Seniors are provided employment training through the program.

Through SCSEP, Mac currently works at the best kept secret in Dayton, the Miami Valley Military History Museum. Doing what he describes as “therapy” for his PTSD and depression. Working at the museum allows Mac to talk to fellow Veterans and help preserve the memory of the Veterans of our Armed Forces. The Miami Valley Military History Museum contains displays from the Revolutionary War and continues through the Indian Wars, Spanish-American War, both World Wars, Korea, Vietnam, the Cold War, Operations DESERT STORM, ENUDRING FREEDOM and IRAQUI FREEDOM and Military Operations Other Than War.

Mac says going through the Goodwill program is the best decision he has ever made. “Goodwill gave me a purpose again. GESMV helped with my PTSD and depression. The people of Goodwill are always there for you; being able to talk to them really helped.” Mac claims that he has witnessed the power of GESMV firsthand. “Goodwill Easter Seals Miami Valley has turned families’ lives around including my own. “ Mac is beyond thankful for everything GESMV has done to help him.

You can find Mac today at the Miami Valley Military History Museum with a big smile on his face ready to show Dayton the importance of our Armed Forces. An opportunity he would have never had without Goodwill Easter Seals Miami Valley.