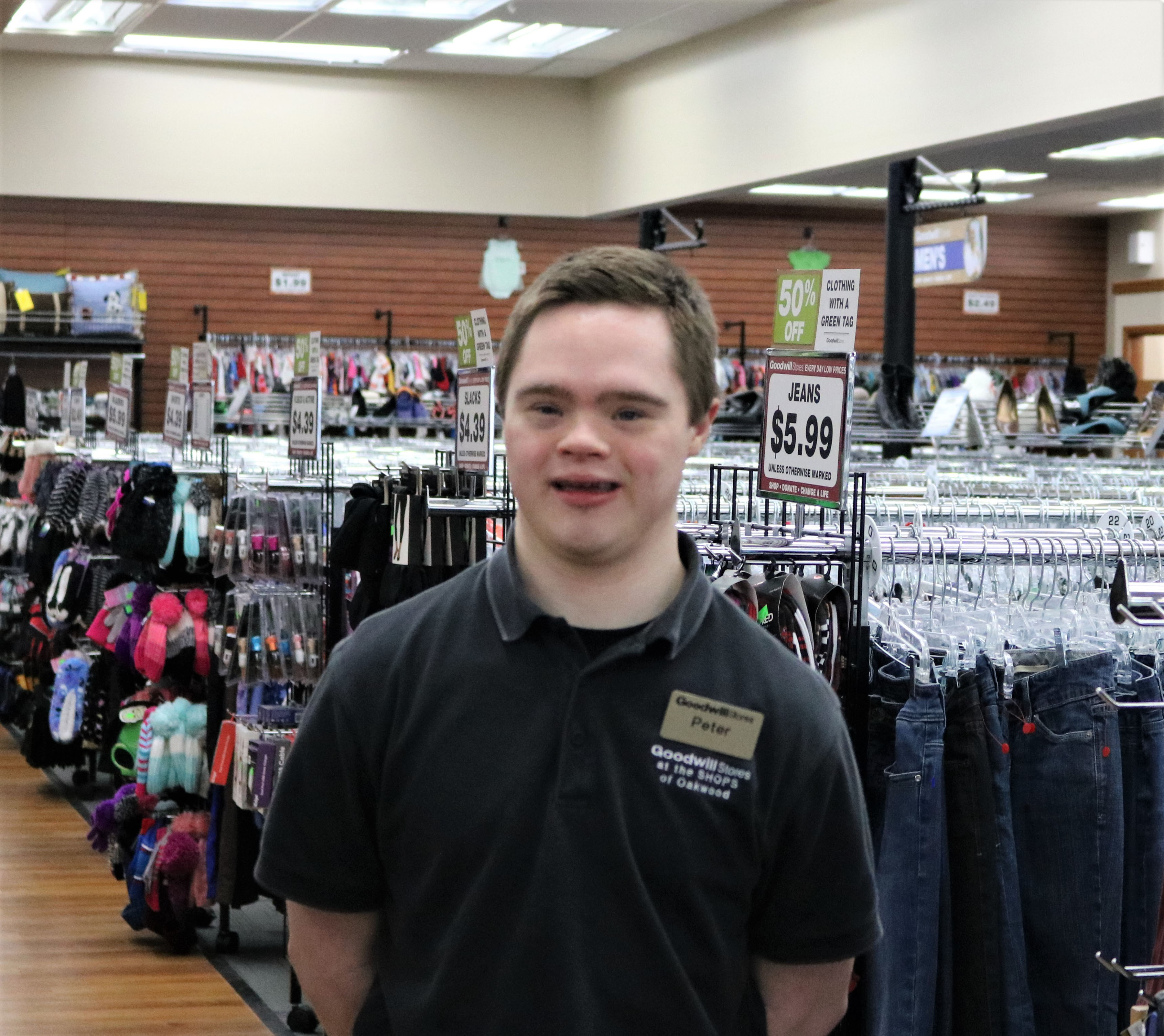 Pete grew up in Oakwood, Ohio and went to Oakwood High School. After High School, Pete’s parents wanted him to have a job that would include being around people, and help him to become more independent. Pete has Down Syndrome and his mom, Chris, mentioned that she didn’t’ think finding a job for him would be easy, but that all changed when the Oakwood Store opened on Far Hills. “Oakwood is where Pete grew up and that is why we thought about applying at the Goodwill Store in Oakwood. We told Pete that the store was opening and he said he really would like to work there. I stopped in the store and asked the manager how Pete would apply for a job and she said the same way everyone else does; you go on line and put in your application. This brought me to tears because Pete was treated as an individual not someone who has a disability. Pete applied and received a call from the manager to come in and interview. “

Pete mentioned that interviewing was easy and that he did it without any help. “I got an interview from Kristy the manager and then I got the job, all by myself!” He was hired on May 25 of 2018. “I told Kristy my strengths are that I am very proud and work hard. My weakness is that I am shy.” Asking Pete why he thinks being shy is a weakness he will say; “Being shy can be a weakness because sometimes I don’t speak up, but working here at Goodwill has helped me to speak up and now I ask lots of questions.”

Pete’s mom says “I love Goodwill and the programs that they offer for persons with disabilities. I love what Goodwill Easterseals Miami Valley is all about. They are all about disabilities and embrace who you are and support that mission. It could not be a more ideal job for Pete. He looks forward to coming in and never misses a day. In fact, Pete never wants to clock out at the end of the day. It has been such a great experience; he is independent, but also has support when he needs it. The transition from school to work has been so smooth.” Pete agrees; “I am very proud working here at Goodwill. I like all my new friends here at the Goodwill Store in Oakwood and it makes it fun to be here. I also get to see lots of people and friends I know from Oakwood.”

Chris would like everyone to know what this experience means to both Pete and their family; “Embracing those with disabilities is what Goodwill is all about. It’s not just about being with people who have disabilities; it is about supporting and getting Pete out in the community. He is not attached to anyone when working. He is given the independence to work and take pride in what he is doing. He is self-sufficient, but if he needs help it is here with all the co-workers and manager. He has built friendships; I can’t say enough, it brings me to tears. It has been an amazing experience. This does not happen all the time, this easily. This is the way the world should be. “

Pete said he has no intentions in leaving and wants to work at the Goodwill Store forever!